I just returned from my first figure drawing class at Watts Atelier- Atelier of the Arts and it was a brilliant breath of fresh air. Taught by two instructors, Jeffrey Watts and Erik Gist, this class touched on many key points that took me nearly ten figure drawing classes throughout college to discover by natural trial and error. There is so much balance that goes into figure drawing that many small concepts when stated seem so simple, but can become lost or forgotten during the course of a drawing. Both Mr. Watts and Mr. Gist performed a 25 minute demo where they both provided commentary on the steps they were taking to create a successful figure drawing within that time. And it was beautiful. I don't know about you, but I have taken roughly 13 figure drawing classes since I first attended art college and I have NEVER had a teacher demo a figure drawing, let alone two teachers! ... and demo it damn well!

This drawing of mine is far' from accomplished, but I think it will be interesting to show each class drawing no matter how good or bad. You can witness any small triumphs and any destructive downfalls. This will be a ten week, weekly diary that should give me an extra nudge of motivation to obtain that much needed progression. [EDiT! that didn't work out so much..only one post] Here is the first figure drawing in all its Broken Bone, Mis-proportioned and Unfinished glory...booyaw. 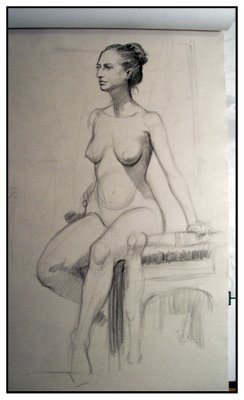 ...that drawing is quite embarrassing. I haven't been figuring drawing much since I left college, but that is a weak excuse. If next weeks isn't better I will officially shooting myself in the face.

nice!, not bad considering your abscence...looking forward to see more! ;)

Don't be embarassed. It's actually a very nice figure drawing for somebody who took a break. Good work!

Hey Josh!
I was so surprised to see you at my blog :D Good surprise!
How are you? You seem to be doing very well in Cali.

We have drawing session at SVA every Wednesday, but it's only open figure drawing class with no teacher. It's a nice break to draw real people sometimes. :D

Watts is the real deal, it seems to be a good blend of the reilly method and the stuff that Bridgeman taught. Beautiful drawing though, I can see sensitivity even at this early stage.

Yeah man, it's like playing an instrument. Nobody just picks up a guitar or sits down at a piano without needing to go through the motions.

don't beat yourself up over it ;3

I envy you man, that's a great school. I visited there last year, with my friend Court Jones, who teaches some of the illustration classes.

Genial brief and this fill someone in on helped me alot in my college assignement. Thanks you on your information.